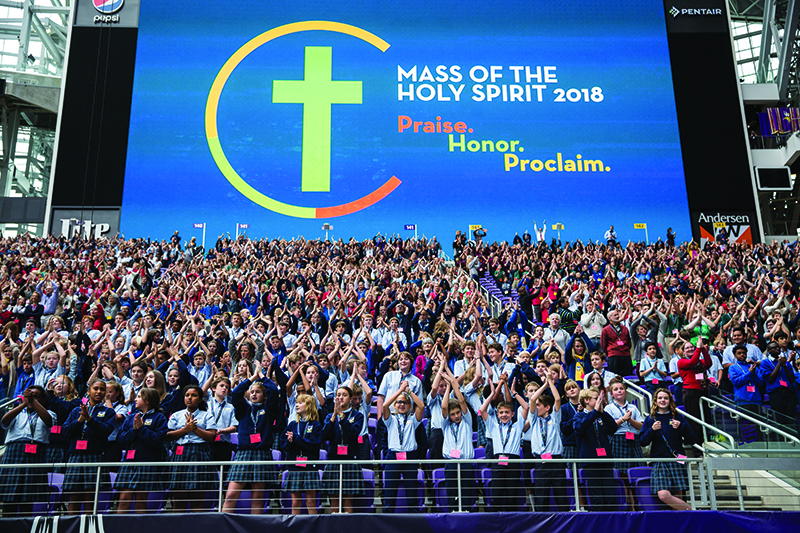 It wasn’t the first time there was prayer in U.S. Bank Stadium in Minneapolis. It wasn’t even the first time people talked about miracles there. But instead of fans praying for a Vikings’ victory, the stadium was filled with 12,000 Catholic school students joined together to praise the Lord at Mass.

The Mass of the Holy Spirit, organized by the Catholic Schools Center of Excellence (CSCOE) to kick off the new school year, brought together students in grades four through eight from the 79 Catholic elementary schools in the Archdiocese of St. Paul & Minneapolis. Archbishop Bernard Hebda celebrated Mass, with Auxiliary Bishop Andrew Cozzens and 70 priests concelebrating.

“Mass is central to what it means to be Catholic,” Birk said. “You students are part of something that can inspire millions of other Catholic school students and parents, give them hope and make them want to be more Catholic.”

Birk was joined by other Catholic athletes, including former Minnesota Wild center Wes Walz, who is the father of five and whose children attend St. Ambrose Catholic School in Woodbury.

“These kids are going to carry on the message of Jesus Christ after we’re gone,” Walz said. “It’s great to have this many young people here to listen to the Scripture and learn to apply it to real life.”

Archbishop Hebda’s homily encouraged the students to take what they heard back to their schools and practice the virtues that perfect them as Christians. Referencing a comeback win pulled off by the Vikings last January, Archbishop Hebda shared that although many referred to the victory as a miracle, it was actually the result of hard work and preparation.

“The players practiced and practiced, and eventually, practice made perfect,” Archbishop Hebda said. “It was a carefully planned and well-executed play, practiced over and over again. Every day in every one of our excellent Catholic schools, we have the chance to practice.”

“The Holy Spirit can make our schools go from good to great, like the best possible coach who breathes life into all our efforts, who inspires us to do our best, to practice what it means to be a good Christian and to put our Catholic values into action,” Archbishop Hebda continued. “Our schools are great places for learning the drills, sharpening the skills, for building our stamina, for learning what true Christ-like success feels like, so that on game day, we will be ready to step up, to put our faith into action, and to be the hands and the feet, the voice, and the compassion of Christ in a world that needs it.”

“I liked the homily and how the Archbishop told us to bring the Holy Spirit back to our school,” she said.

Parents who attended were also encouraged by the Mass. Lenny and Brenda Rodriguez, parents of a seventh grader from St. Helena Catholic School in Minneapolis, volunteered at the event and hope to do so again.

“It was a wonderful experience,” Brenda said. “We loved the Mass, and it was a great homily. It’s good for the kids to be close to each other and ask the Holy Spirit to bless the schools.”

The presence of the Holy Spirit was evident, from the energetic participation in the music to the reverent worship during Mass.

“Like the Archbishop said in his homily, practice makes perfect, and it’s the practice day to day that our Catholic schools are doing,” Bishop Cozzens said after the Mass. “I noticed between the readings how quiet it was — 12,000 people here, and it’s absolutely silent. That’s because these kids go to Mass every week, and they know how to pray. They know how to reverently celebrate the Mass, even in a stadium.”

The presence of students from the 79 archdiocesan Catholic schools in one place was a powerful sight.

“It’s overwhelming to see that all these children have the opportunity to be in a Catholic school every day,” Bishop Cozzens said. “To see them all together at once is really overwhelming and beautiful, and it gives you a lot of hope for the future of our Church.”

The Knights of Columbus, the Catholic Community Foundation of Minnesota and the Richard M. Schulze Family Foundation sponsored the event. CSCOE held the first Mass of the Holy Spirit in the archdiocese in 2016 at CHS Field in St. Paul.