For His Glory builds teamwork, bravery and fun 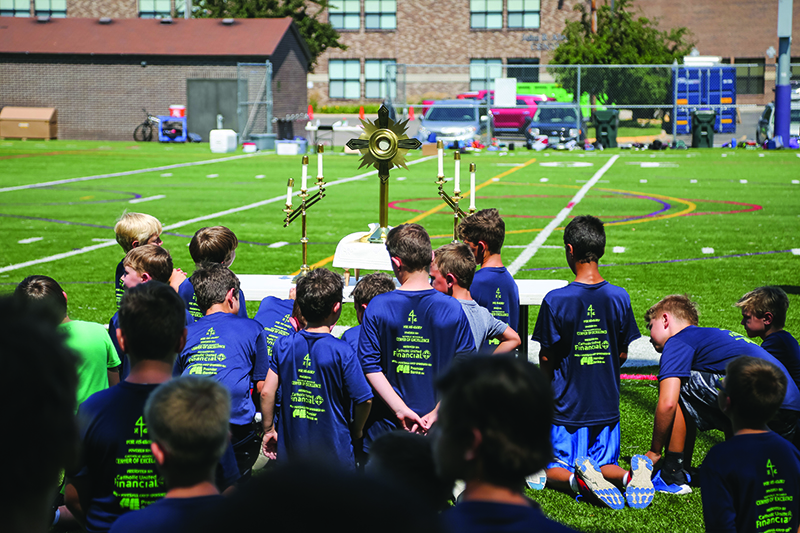 The end of the 2018-2019 school year also marked the end of the first year of the For His Glory (4HG) athletic program. Just one year in, students, parents and coaches are already benefiting from this faith-based sports initiative.

Last year, 35 schools held 4HG basketball clinics. Others hang the inspirational banners and posters in their gyms, or incorporate the lessons of 4HG — fun, sportsmanship, faith, and doing your best — into their ethos.

The impact has even gone beyond school walls. Fifth grade student Dan Hawkins also plays for a city hockey team and has taken the 4HG message to heart.

“He is proud to wear the band,” Dan’s mother, Leah, explained, referring to the 4HG swag he received. “When asked by other parents or players what the meaning is, he is proud to tell them: God is first, then family, then school, and then hockey.”

Faith on the football field

“Football really lends itself well to faith,” Birk said. “With football, you need discipline and hard work. We bring to life some of those things on the field and then tie it to faith so they can dive deeper into their faith with their peers.”

The camp offered football drills alongside inspirational talks and dedicated time for the sacraments. On the last day of camp, such a long line of students formed for the Sacrament of Reconciliation that organizers extended the time period.

Originally developed with the Catholic Schools Center of Excellence and Birk, the 4HG partnership has expanded to include Catholic United Financial. Together, they work to create a healthy sports culture in Catholic schools.

“Our partnership with 4HG and CSCOE helps us continue our commitment of supporting Catholic education. That’s something we’ve been doing for 150 years, and so it fits directly into our core values as an organization,” said Harald Borrmann, president and CEO of Catholic United Financial. Over the years, Catholic United Financial has given $4.2 million in tuition assistance and raised $8.5 million for Catholic education through their raffle fundraiser.

“When we look at the good work of 4HG, it speaks to the participation of all kids. That participation is critical to the complete education of a child,” Borrmann said.

Noah Henle contributed to this article.