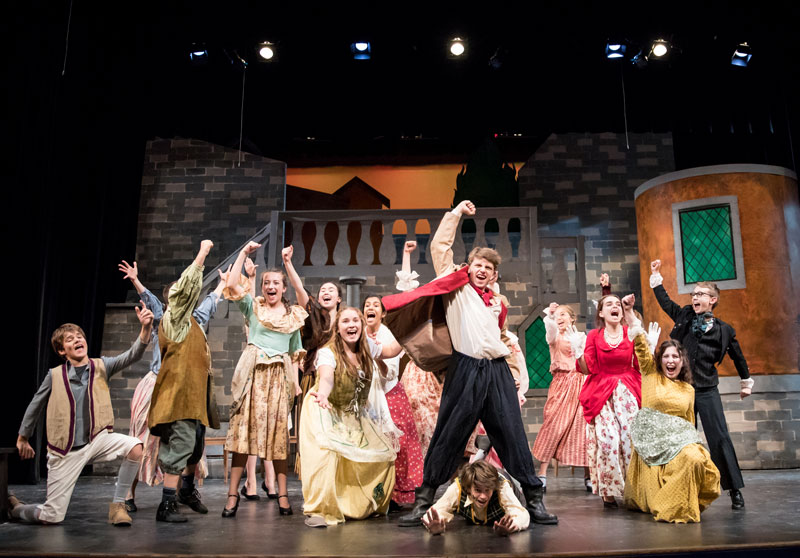 Keegan Bersie-Mize had his first theater class at age 6. Over the years, the eighth grader at St. Thomas More Catholic School in St. Paul has transitioned to stage productions.

“There’s such a feeling of accomplishment with the camp classes or main stage productions,” Keegan said. “[You’re] taking something that you wrote or was handed to you and developing it. It feels really great to take something from the beginning and make it into a stage-worthy production.”

Keegan’s mother, Inez Bersie-Mize, has seen his confidence develop at St. Thomas More and now mature through his theatrical involvement at SteppingStone Theatre in St. Paul.

“He’s learned so much independence in a super safe environment, both at his school and at SteppingStone,” Inez said.

Parent Lisa Smit said that her daughter Madeline, an eighth grader at Nativity of Our Lord Catholic School in St. Paul, can now walk into a group of people she doesn’t know and talk and work with them — not an easy task for many middle school students.

“I’ve seen her confidence in being on stage grow,” she said.

Madeline appreciates all the new faces.

“[The students] have such a sense of responsibility,” she said. “They are such well-rounded students — balancing their faith, their families and their activities.

In addition to confidence, performing arts help youths develop focus, responsibility and self-expression. As a result, parents have seen their children flourish.

The influence of Catholic education is something Kiersten Birondo, SteppingStone’s community relations representative, sees in the students. The “whole child” philosophy of education found at Catholic schools builds a foundation for student success in fine arts.

“[The students] have such a sense of responsibility,” she said. “They are such well-rounded students — balancing their faith, their families and their activities. That is something that is wonderful for the culture of SteppingStone, and it reflects beautifully on Catholic education.”

That involvement extends beyond the stage. Birondo said that entire schools came to see their students perform in SteppingStone’s December production of Disney’s “Beauty and the Beast Junior.” Prayers for good performances were included in Nativity of Our Lord’s morning prayers.

“The teachers, staff and school were so supportive,” Smit said.