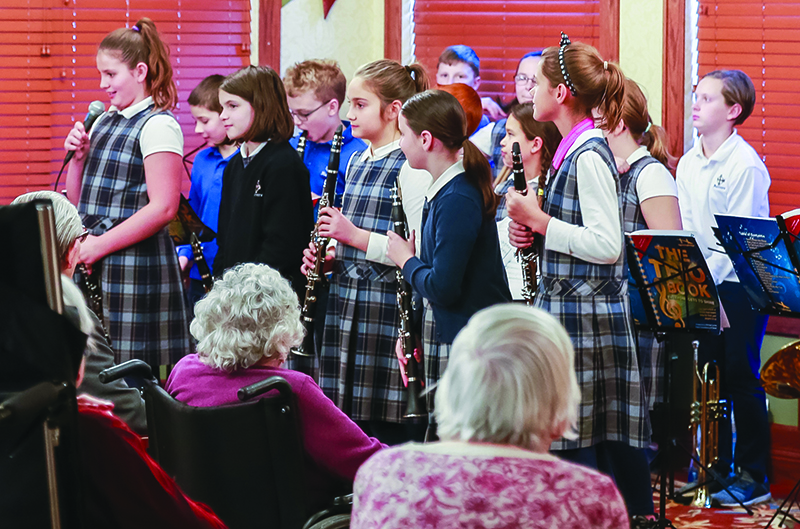 Just a few musical notes. That’s all it took before smiles appeared, toes started tapping and people began singing along to “Bicycle Built for Two.”

For the performers — members of the seventh grade band at Nativity of Our Lord Catholic School — this was not a typical school concert. For starters, it did not take place at their school in St. Paul but rather after school, a few blocks away. They played as a small 15-piece ensemble rather than as a full seventh and eighth grade combined band. And the audience comprised dozens of elderly people living at Carondelet Village, a complex consisting of senior and assisted-living apartments in addition to memory care and skilled nursing care units.

Harmony Bridge is the school-based program that brought together these young musicians and senior citizens. Founded by Michael Levine, a native Minnesotan and professional trombone player, Harmony Bridge encourages elementary, middle and high school band students to share their musical talents with local seniors. Special color-coded musical arrangements provide all groups of instruments with opportunities to “solo” and typically feature familiar melodies, such as American folk songs, that resonate with older audiences.

“With Harmony Bridge, we’re pushing past the traditional mold of just playing a Christmas concert and a spring concert. We’re giving students more opportunities to get out into the community and play their instruments in a more informal environment, which they love to do,” said Troy Newlove, who introduced the program in 2017 when he became Nativity’s instrumental music director.

Of Nativity’s 825 students in grades preschool through eighth, 110 participate in the instrumental music program, which spans fourth through eighth grade. Each of those grade levels performs at least one Harmony Bridge concert during the school year at various senior care facilities throughout St. Paul.

“This program is a perfect fit with Nativity’s educational mission because it helps students develop a heart for service, using the gifts and talents they’ve been given by God,” said Kate Wollan, who has served as Nativity of Our Lord’s principal for 26 years. “It’s also mutually beneficial. Our kids mature into young people of character as they willingly share their artistic gifts, and in return the seniors are such a supportive and encouraging audience.”

In addition to its performance and community outreach components, Harmony Bridge emphasizes interaction among the musicians and their audiences to build intergenerational rapport. Between songs, for example, Newlove asks the students to introduce themselves and share something personal, such as a favorite sport or hobby. When a Harmony Bridge concert concludes, rather than immediately packing up their instruments and music stands, the students walk into the audience and chat with residents for about 30 minutes. For many students, this is their first encounter with older people who might use walkers or wheelchairs, have significant medical issues or have impaired sight or hearing. Students are encouraged to pair up for this portion of the program and are provided with conversational prompts, such as asking the residents whether they had ever played an instrument. “Sometimes it’s a little hard to talk to people who are strangers. It’s less awkward when you’re with a friend,” said Mary Musolf, a seventh-grade clarinetist. “We just say ‘hi’ to see if they want to talk, and then we usually start hearing their stories.”

“It’s fun to play in the community, and meeting the people is a really good experience,” said Bella Brondum, a Nativity of Our Lord seventh grader who plays the tambourine, wood block and other percussion instruments. “Everyone is always so nice. One lady even asked me for a hug, so I gave her one.”N

That hug, or simply hearing a favorite song, might be the highlight of someone’s week or even month. For some of the residents, Newlove noted, a Harmony Bridge concert might be the first time they’ve interacted with a child in a long time.

“We see lots of smiles, which shows the value and power of music, of how therapeutic it can be,” he said.

“Music is about so much more than just playing every single note and rhythm perfectly. It’s about spreading joy — and that’s what this program does.”