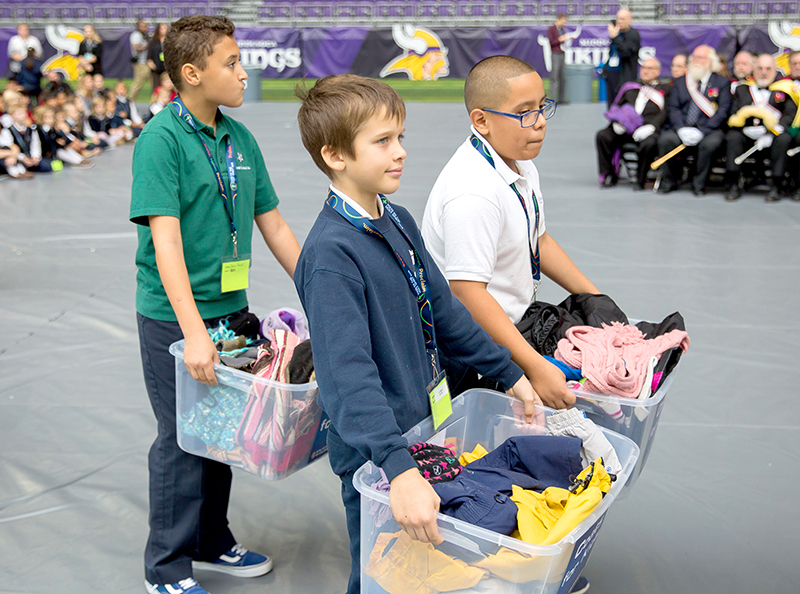 As part of the Mass of the Holy Spirit, students were challenged not only to know their faith but also to live it. New to the event this year was the partnership with the Knights of Columbus Coats for Kids program, a national initiative that collects new or gently used coats, hats and mittens and distributes them to children in need. Students brought in coats and other winter gear to their school before the Mass. The Knights collected the items in bins at the stadium and distributed them through councils around the state.

Mark McMullen, senior vice president of membership and fraternal mission for the Knights of Columbus in New Haven, Connecticut, said that the program was a model for encouraging Catholics to put their faith in action. He helped the Knights in Minneapolis distribute coats during Super Bowl week, and said the scale of the Coats for Kids project was impressive.

The drive also encouraged students to take the theme home with them and practice it throughout the year, “in ways like helping their teacher clean the classroom, making friends with a new student or being kind to someone who is having a bad day,” said Melissa Hamilton, CSCOE’s communications manager. “The response has been tremendous. Our students collected more than 9,000 winter items for other students around the state, and positive testimonials keep coming in.”

State Deputy Knight Marc Peters said the Coats for Kids project is one of 16 main events that councils are asked to participate in, and each year it gets bigger.

“We’ve been doing this for years,” he said. “There are people really in need, and they are so grateful for the coats. I’m excited to be here and see all these kids come in.”

In 2009, the Knights of Columbus launched the Coats for Kids program to ensure every child in need has a warm winter coat. This initiative began in response to the statistic that 21 percent of American children live in poverty and go without a winter coat every year.