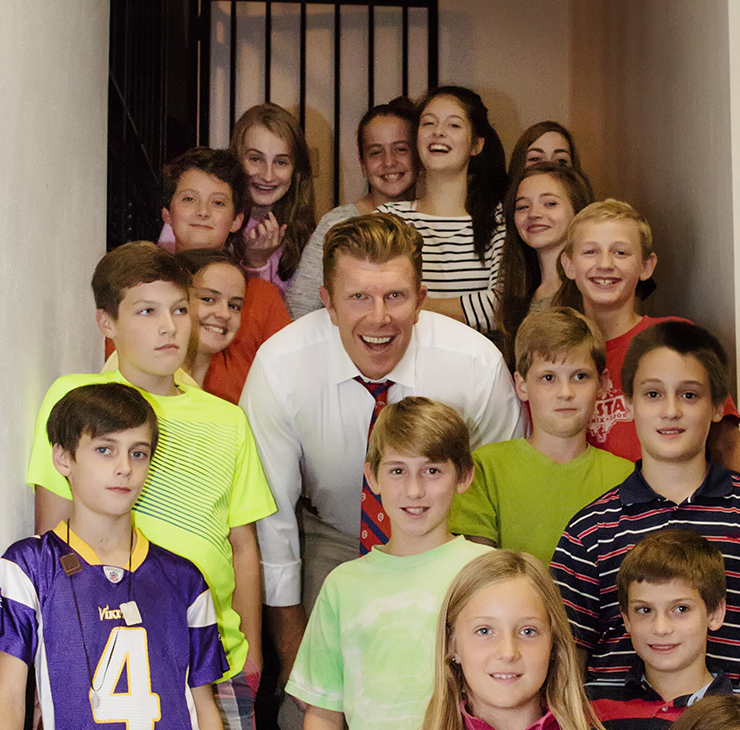 When retired NFL star and Super Bowl champion Matt Birk returned to his elementary alma mater of Nativity of Our Lord Catholic School in St. Paul, students might have expected him to share epic stories of guts and glory on the gridiron, rare glimpses into NFL locker room culture and perhaps even insider tips on which players to pick up for fantasy football. They were all surprised, then, to hear a different core message that Birk repeated throughout his visit: Sure, football is great, but God is greater.

That’s not to say he didn’t have anything to say about football. In fact, he was happy to tell stories about Super Bowl XLVII, the one where the lights went out at halftime, and how his team, the Baltimore Ravens, came out victorious in the end. He was happy to declare that the position he played, center, is “the most important position on the football field,” with just a bit of sarcasm. He also encouraged the students to “play sports as long as you can.”

But he also urged them to branch out and try activities they think they’d enjoy. He told the students he was in school theatrical productions, and he really enjoyed the experiences. He also said he regrets that he didn’t audition for the school band.

“I wanted to join the band,” he said, “and when I was in the fourth or fifth grade, my friends were like, ‘No, you don’t want to join the band.’ And I listened to them, and I shouldn’t have done that.”

How can young people make better decisions, big and small?

“Pray for five minutes every single day and go to church,” Birk told Nativity students. “Remember that you’re children of God, and that you’re here to know, love and serve God. Things change really fast, and the world can be a confusing place. But as Catholics, we shouldn’t be confused because we know who made us, and we know what He expects of us.”

In an interview after he spoke with the students, Birk described what he gained as a student at Nativity of Our Lord.

“What Nativity gave me is that inner life,” he said. “Even when I was away from the Church, I still felt the presence of God.”

He reminisced about the Sisters of St. Joseph and the lasting impact they made teaching him.

“There was no question they loved us, they cared about us, and they wanted to see us succeed,” he said. “These women were a real-life example of giving your life to God.”

But he also lamented that even after going to Catholic school his entire life, he doesn’t think that when he was a student he could have really articulated what’s truly important — in other words, what the Catholic faith is all about.

“That’s kind of what I tried to hammer home today,” he said about his presentation to Nativity students. “You know you’re a child of God. You are here to know, to love and to serve God. If you just remember that, that can get you out of a lot of sticky situations.”