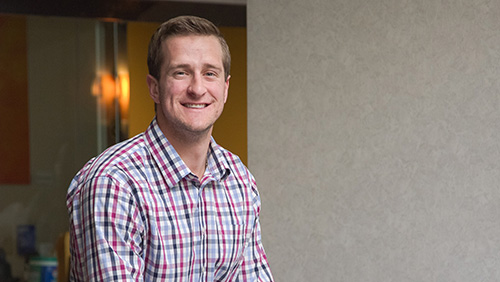 Peter Westerhaus has stared death in the eyes several times over. And yet, he keeps smiling. But muddling through adversity wasn’t easy.

“I had to embrace my faith, which was rooted in my upbringing and Catholic education,” said Westerhaus, 24, a graduate of Shakopee Area Catholic Schools (SACS).

He attended Holy Family Catholic High School in Victoria and won Minnesota’s Mr. Football 2010. The 6-foot-3-inch 235-pound linebacker signed on to play football for the University of Minnesota. The NFL seemed within reach.

However, tragedy struck its first blow.

While hiking in the Grand Canyon that spring with his parents, Jon and Sue Westerhaus, and his brother, David, a rock struck him in the forehead, cracking his skull. He needed 50 stitches, suffered a severe concussion and lost 30 pounds while recuperating.

With the medical setbacks, he was redshirted his freshman year. Eventually, he resumed playing football.

“My weight returned sophomore year, and I was making good plays,” he said.

But by the Gophers’ first game that fall, he was diagnosed with ulcerative colitis. Medication didn’t suppress the disease. He was in and out of hospitals. Sleep was a stranger.

Then in 2013, a life-threatening infection developed. Throughout 2014, he had three surgeries removing his large intestine — ending his football career.

What got him through those dark years?

“Before I was sick, my faith was part of me,” he said. “When I was full of despair, the prayers and values I had learned from family and school allowed me to hold on, giving me the foundation needed to succeed and take on the tough stuff.”

At the peak of his illness, a teacher brought him hundreds of cards from the students at SACS. A teammate from Holy Family organized a prayer service.

“It meant so much to me knowing they were praying,” he said.

Westerhaus, who lives in Plymouth, graduated from the Carlson School of Business in 2016. He founded a nonprofit called Achieving Cures Together (www.achievingcures.com), which helps support academic research focused on microbial restoration therapy — a procedure that can eliminate an antibiotic-resistant superbug, which kills 30,000 people a year and nearly killed him.

He’s collaborating with Dr. Alexander Khoruts, one of his physicians, in this pioneering therapy, which is 90 to 95 percent effective.

Since Westerhaus started this nonprofit endeavor in 2016, his organization has supported the treatment of 80 people.

“As much as I wanted to play football, I now see my illness as a gift, because it helped me put things into perspective,” he said. “It challenged me to grow in my faith and to help others who are battling their own crisis.”