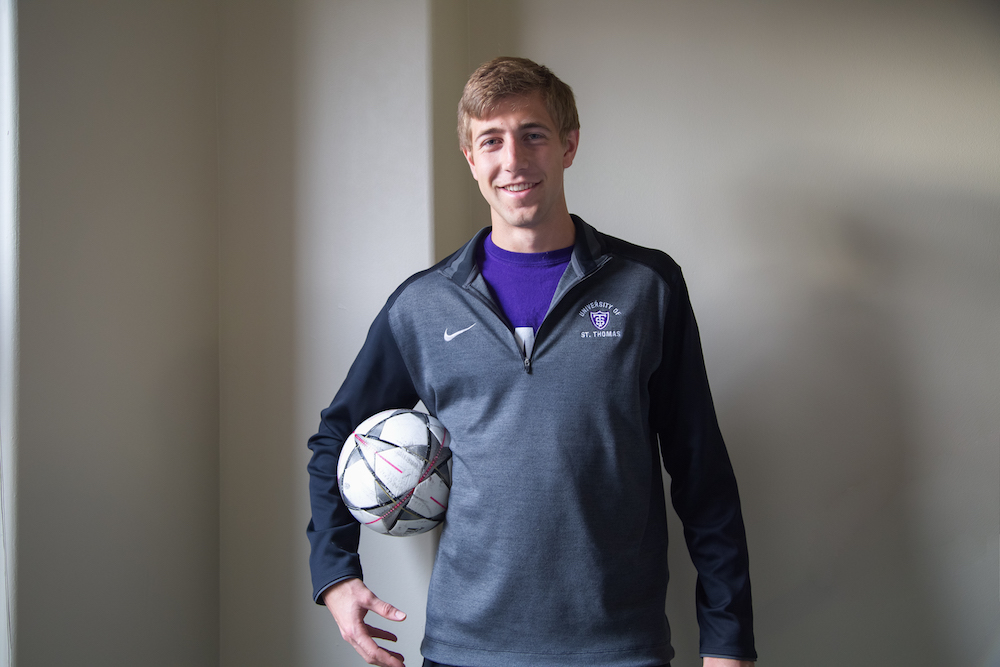 UNIVERSITY OF ST. THOMAS SENIOR BRINGS FAITH LESSONS TO THE SOCCER FIELD AND BEYOND

Tony Kuplic isn’t exactly a household name, but to his teammates on the University of St. Thomas soccer team — and their NCAA tournament opponents — he might as well be professional soccer player Cristiano Ronaldo. Kuplic scored a remarkable five goals in four tournament games, including two overtime game-winners to help lead the Tommies to their first Final Four and a school-record 20 wins.

Yet, he has managed to remain humble in the midst of athletic success, which he attributes to his upbringing in a strong Catholic home, his education in Christian schools and a commitment to what’s most important, namely his relationship with God, he said.

Kuplic learned how to play sports from his dad and brothers, and his love of sports was nurtured at a small Catholic school in south Minneapolis. Visitation School closed in 2008.

“I think having a Catholic education is really impactful, and having sports along with it was a big part of it,” Kuplic said. At Visitation, he learned how to treat people with respect in the classroom and then had an opportunity to practice those virtues under duress on the playing field.

“We would play other schools and maybe there would be trash-talking, cheating, arguing with the referees,” he explained. “There’s a temptation to do what they’re doing and do the same thing. But the morality we were taught in school taught me how to respond in those situations.”

He also learned that as much as he loved sports, there was more to life than putting a ball in a net.

“I remember in first grade one of the assignments was to write an essay of what you want to be when you grow up, and I said either I want to be a professional athlete — or a priest,” he said with a chuckle, amused by the contrast of the two. “But I don’t think I would have even thought about [the priesthood] if I was in a [non-Catholic] school.”

He said the faith and character of the leaders of his Catholic grade school — and the culture they established — stayed with him.

“The teachers, the parish priest, the principal — knowing that they are faith-filled people and they are the people I look up to,” he explained, “that had a big impact on me growing up.”

From Visitation, Kuplic went to Trinity School at River Ridge in Eagan, where he spent his seventh- through 12th-grade years. Trinity is run by a charismatic ecumenical community called People of Praise, of which Kuplic’s parents are members. Kuplic excelled in sports at Trinity, where he set the school record for scoring in basketball and was a finalist for Mr. Soccer, an award for the best senior soccer player in the entire state.

And while he was recruited to continue his athletic career at the collegiate level, he chose the University of St. Thomas for other reasons: a confidence that he’d be challenged academically and, more importantly, that he’d be supported in his growing Catholic faith. He lives in a People of Praise household for students just off campus, where he rises daily at 4:45 a.m. to pray and study.

After he was cut from the soccer team his freshman year, he tried out again his senior year knowing he would likely warm the bench even if he made the team. But he never doubted his own abilities.

“I knew I could score goals,” he said.

Kuplic drew again on his Catholic faith to guide him. When asked about his approach to his senior season, he said, “Honestly, I was thinking about Jesus and the way he told his disciples and the Pharisees to take the lowest place.

“And that was my mindset during the season,” he continued. “Pick up cones, put pennies away, do what I can to take the lowest place on the team. I think the good Lord … I think [my coach and teammates] appreciated that.”

Kuplic’s patience paid off. He entered the Tommies’ first-round playoff game against the College of St. Scholastica having never so much as shot the ball at the net. He scored two goals, one to force overtime and one to win it. That would have been remarkable on its own. But then Kuplic did it again in the national quarterfinals, scoring a goal in regulation and another game-winner in overtime. Throw in his goal in the second round game against Luther College, and you get one of the most incredible and improbable streaks college soccer has ever seen. The Tommies’ fairy-tale season concluded with a tough loss in the national semifinals.

Once Kuplic completes a degree in mechanical engineering this spring, he’ll begin his career at Boston Scientific. Reflecting on his athletic success, he’s satisfied, but not for the reasons one might think.

“I was thinking during the postseason,” he said, “about the scene from ‘Chariots of Fire’ when Eric Liddell says, ‘I believe that God made me for a purpose, and God made me for China, but he also made me fast, and when I run I feel his pleasure.’”

“My high school basketball coach, Dr. John Buri, emailed me and reminded me that before the Final Four,” Kuplic continued. “That’s what I was thinking about and experiencing, feeling God’s pleasure, running and playing soccer.”

And now that he’s done with soccer, Kuplic plans to take that same mentality with him into the professional world and beyond.

“It impacts [the way I approach] my job, my vocation,” he said, “just knowing that God delights in my natural talents and gifts.”