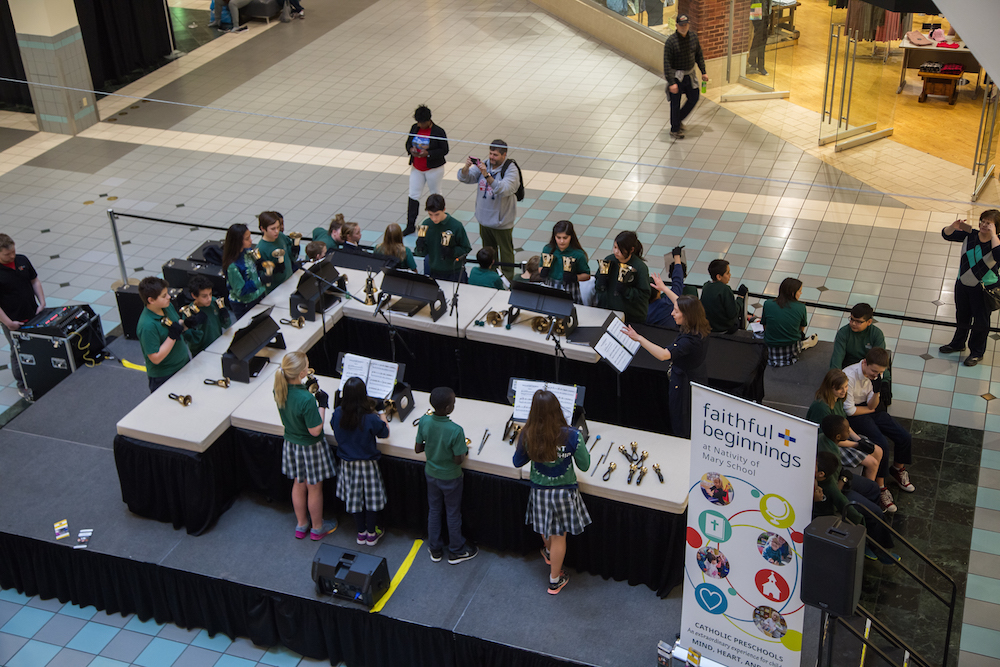 Middle school students from Nativity of Mary School in Bloomington showcased their handbell skills at the Mall of America in Bloomington Jan. 25, drawing many spectators. The Mall of America’s “Music in the Mall” program invites school and community groups to apply to perform in Sears Court throughout the year. Nativity of Mary applied and made the cut.

“It was so exciting to know that we were going to have this opportunity to get out into the community and share this with people,” said Emma Shukle, the school’s music teacher.

“I’m now finding that quite a lot of kids want to do handbells because it’s something that’s so different,” she said of the ensemble. “The students feel cool having such a unique piece of equipment in front of them that not everyone gets to use.”

The classes worked hard to prepare several different pieces for the event.

“I think it’s really cool that other people will hear our music, not just our parents and grandparents,” said eighth-grader Cormac Merrill. “It’s also an honor to be playing at the Mall of America.”

Seventh-grader Ariel Aguirre joined the handbell choir because he wanted to try something new.

“And once the bells all come together, it sounds really cool,” he said.

The program has grown extensively since it began nearly 10 years ago. So many students have chosen to be in the ensemble that Shukle now has two handbell classes with 34 students total, allowing the groups to explore an extensive amount of bell positions and techniques.

Shukle noted how the program has given students a chance to grow in self-confidence and class engagement; students have told her how the handbell choir has motivated them to participate in and lead other activities.

“It’s been amazing how they were able to grow as individuals and musicians,” she said.

“It’s really fun, and it’s really cool how the bells developed from when we first started playing to now, when we’re performing at the concert.”

Principal Mindy Reeder emphasized the opportunity and skill set that the handbells give the students.

“I think what’s very unique about playing bells versus other instruments is that it is kinesthetic as well as musical, which is very beneficial for mind development,” she said. “There are a lot of students for whom this is a really good focus because they’re able to stand and move, as well as read the music.”