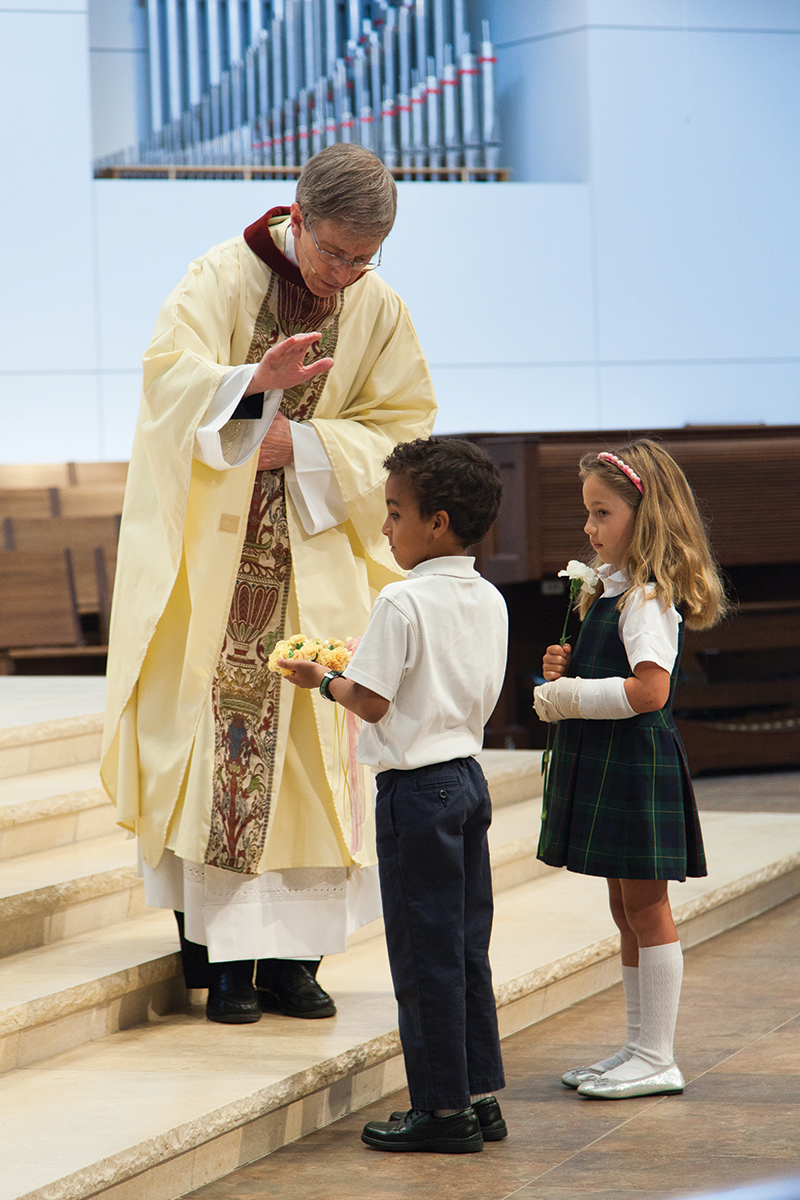 Catholic education has played a significant role in Father Michael Van Sloun’s life: he attended Catholic schools from childhood through college, starting with elementary school at Incarnation in south Minneapolis. He also taught biology and coached athletics for a Catholic high school.

When he became a priest after 23 years as a Crosier Brother, Father Van Sloun hoped to serve at parishes with a school. Since his ordination in 1995, that hope has been realized. As pastor of St. Bartholomew in Wayzata, Father Van Sloun helps oversee St. Bart’s School, which has around 140 students in preschool through sixth grade.

“It quickly became well known around the Archdiocese of St. Paul and Minneapolis that I love Catholic schools,” Father Van Sloun said.

He keeps the biblical account of Jesus with the little children — Matthew 19:14 — in his mind and heart as inspiration in his ministry.

“Jesus showed us that ministry to children is one of the most important priorities of the Church,” he said. “A good, effective priest has a good relationship with children. They keep us grounded.”

At St. Bart’s, Father Van Sloun regularly interacts with students. He especially looks forward to celebrating the weekly school Mass and teaching religion to fifth and sixth grade students once a week.

“As a teacher, the most gratifying experience is seeing the kids’ expression when they have an ‘aha’ moment of understanding about Jesus and our faith,” Father Van Sloun said.

Patrick Fox, St. Bart’s principal, said Father Van Sloun has a good rapport with students because he respects them and challenges them.

“Father Mike is an educator who affirms and values each child’s input,” Fox said. “St. Bart’s students really enjoy Mass with him, especially his homilies, because he includes them.”

In addition to being a pastor, Father Van Sloun has been the Minnesota Vikings’ team chaplain since 2002. In this role, he celebrates Mass for players and coaches the night before games.

He said that while it’s a blessing to minister to some of the best in professional football, he always keeps in mind that before God, everyone is equal and needs his grace.

“Having coached for so many years, I certainly don’t worship the players,” he explained. “I have taken the opportunity to serve them, because no matter who we are, we all need to be nourished.”

And while one might think Father Van Sloun’s chaplaincy with the Vikings impacts his work with students at St. Bart’s, the opposite is also true. More often, he said, his time with the students inspires stories, questions and lessons that he shares with the Vikings team.