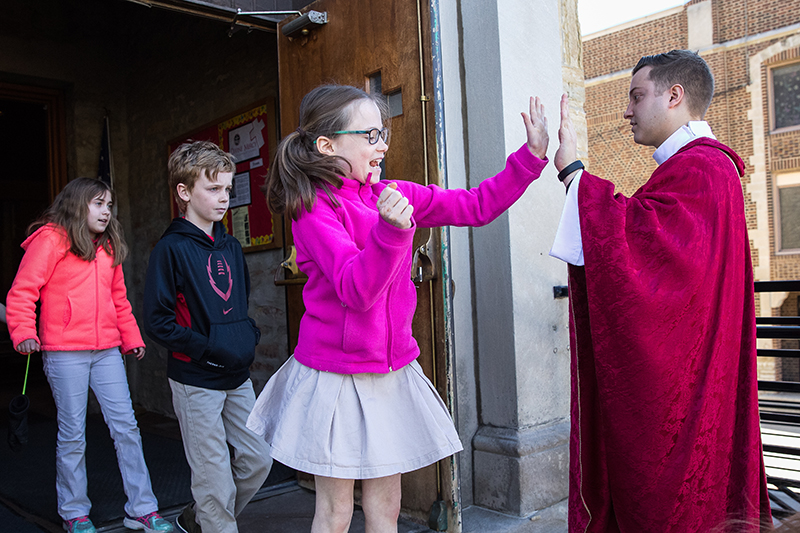 When Claudia Garcia’s oldest child started school, she enrolled him in a public kindergarten. In time, concerned about her son’s progress, she moved him to Divine Mercy Catholic School in Faribault.

“He just loved it,” recalled Garcia, whose son is now in fifth grade. “At the public school, he had between 27 and 30 students in his class, and the teacher couldn’t keep an eye on everybody. At Divine Mercy, the kindergarten class was maybe 17 students.”

Garcia’s daughter, a third grader, has attended Divine Mercy since kindergarten as well. While smaller class sizes were the initial draw, Garcia has come to appreciate the school’s sense of community.

“It’s a close-knit environment,” she said, “where all the parents and teachers know the kids, and the families know each other.”

For third grade teacher Gloria Duban-Reuvers, that strong sense of family is the reason she’s been teaching at Divine Mercy for 30 years.

“You form connections with students and their parents, and often come to know grandparents, too,” said Duban-Reuvers.

Duban-Reuvers’ own children attended Divine Mercy — where preschool through fifth grade are housed — and then moved seamlessly to Bethlehem Academy, also in Faribault, which serves middle and high school students. Together, Divine Mercy and Bethlehem Academy form a Pre-K through grade 12 Catholic school system, which is unique in the Archdiocese of St. Paul & Minneapolis.

I look at it as an investment in my kids’ future.

Gina Ashley has worked at Divine Mercy nearly as long as Duban-Reuvers, becoming its principal six years ago after 23 years as a teacher. The two have witnessed firsthand the school’s commitment to maintaining its traditional familial environment and academic excellence even as the demographics of the surrounding community have changed.

“Our church has a growing number of Hispanic families,” Ashley said. “We are blessed to have many of the families choose our school.”

In addition, Ashley is committed to ensuring the school remains affordable for all families. As a result, Divine Mercy hasn’t increased tuition in six years.

During that same period, the school has experienced steady growth. With nearly 300 students enrolled, it now has two sections in each grade.

Holding the line on tuition, Ashley said, “has required some creative thinking to ensure that anyone in our community who wants a Catholic education can afford it.” Several years ago, for example, Divine Mercy parish introduced a tithing initiative, and the school’s annual fund and annual gala raise money for scholarships. In addition, school administrators pursued grants that have enabled them to expand Divine Mercy’s Faithful Beginnings preschool offered through the Catholic Schools Center of Excellence (CSCOE) and establish a resource room to assist students needing remedial education.

Claudia Garcia’s son has benefited from that resource room, and both her children receive financial assistance.

“The school’s financial aid is a great help because I’m a college student and only work part time,” Garcia explained. “Even the discounted tuition can be a little hard to pay, but I look at it as an investment in my kids’ future.”

The most recent grant Divine Mercy received from CSCOE supported the start of a robotics program. Tommy Kunze, who named math and computer lab as his favorite subjects, looks forward to attending the new after-school club for fourth through eighth graders. The fifth grader is an equally big fan of the school’s ongoing outreach to local senior care facilities. In fourth grade, Kunze explained, “We visited people in a nursing home and wrote them letters and valentines, so no one would forget them. I liked doing that.”

Facilitated through the parish’s pastoral care ministry, the relationship between each grade and a nursing home or assisted-living facility is mutual — the students write to and pray for the residents, and vice versa. Occasionally, the students make personal visits to sing Christmas carols, play cribbage and celebrate Mass with their elderly friends.

Through such community outreach, Duban-Reuvers explained, “We’re really focusing on the works of mercy — what can we do for someone else?”

My children see that they are part of a bigger picture within their community.

Last Christmas and Lent, for example, her students gathered gifts for distribution by the St. Vincent de Paul Society. Another class collected food and clothing items for a local shelter that helps women and children. Each year, the school also selects a service project on a global scale. One year, for example, the students raised money to build a well in an African village; in 2018, they raised $11,000 to purchase supplies and then packed more than 40,000 meals to feed undernourished families in other countries.

“My children see that they are part of a bigger picture within their community, but also everywhere,” said Sarah Duchene, whose kindergartner and second grader are the fourth generation of their family to attend Divine Mercy. “The teachers relate everything back to the Bible and how the children are here for a purpose — to serve God and to serve others.”

As an elementary teacher herself in a nearby public school system, Duchene appreciates Divine Mercy’s rigorous academics and positive culture.

“There are consistent expectations, follow-through and great classroom management from every teacher I’ve seen,” she noted. “There’s support from the principal and great communication with parents, and all three of the priests from the parish are present in the school.”

“We all go into the classrooms at various times during the year — for example, to meet with the children who will be making their first Communion or to answer the questions of fourth graders who just finished studying the Ten Commandments,” said Father Kevin Kenney, who has served as pastor of Divine Mercy parish for almost three years. Once a week, he added, the two associate pastors of the 2,500-family parish join the students for a meal in the school lunchroom.

The school now known as Divine Mercy dates to 1865, when several Sinsinawa Dominican Sisters arrived in Faribault at the request of the bishop of St. Paul. The nuns set up Immaculate Conception School in a church basement, later moving the elementary school to a separate building. Following the consolidation of three Catholic parishes about a decade ago, the new parish of Divine Mercy emerged, with the parish school renamed accordingly.

A new church was then built on the outskirts of Faribault, which has about 30,000 residents. On the same site, a rectory was constructed.

“It’s called the House of Gratitude, and the parish built it in gratitude for all the priests who have been here and who will be here,” Father Kenney explained. Parishioners donated all the construction labor, materials and furnishings.

Someday, the Divine Mercy community plans to build a new school on the church property as well. For now, the school continues to operate in its historic 118-year-old building that still delivers educational excellence.

Said Duban-Reuvers, “The people who send their kids here want them to grow up to be smart, but also to be kind and to make the world a better place.”