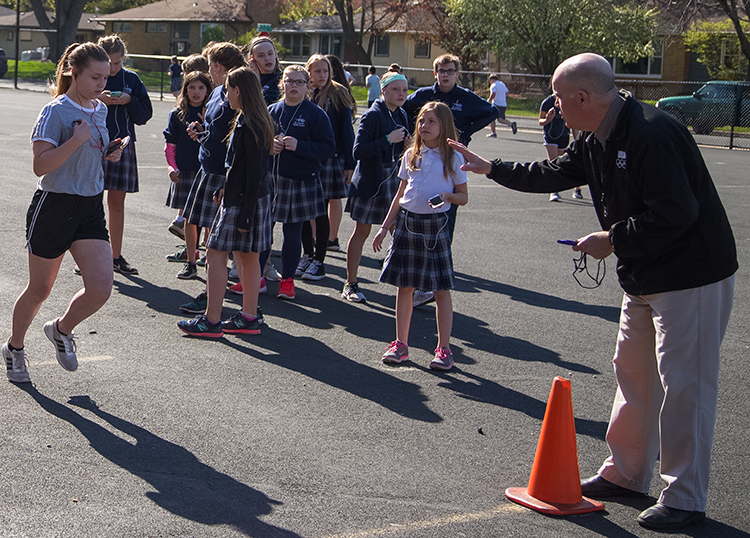 ST. CHARLES BORROMEO: A HOME AWAY FROM HOME

FOR NEARLY 80 YEARS, THE PRESCHOOL THROUGH EIGHTH-GRADE SCHOOL IN ST. ANTHONY HAS FOCUSED ON PROVIDING STUDENTS WITH A FIRM FOUNDATION IN THE FAITH.

When Patrick Felicetta’s oldest son was in kindergarten, a bout of pneumonia meant the boy missed all the special Christmas events at St. Charles Borromeo School. One day, the kindergarten teacher unexpectedly rang the family’s doorbell to deliver Christmas greetings, along with a card signed by the boy’s classmates.

“My son, who had been so sad and so low, really cheered up when his teacher came to the house,” Felicetta recalled. “No school curriculum can substitute for love of a child, and to us that visit was a real sign of kindness and love.

“What matters at St. Charles isn’t what you have or who you know,” continued Felicetta, who plans to enroll his younger son in the school’s preschool this year. “What matters is who you are. Everyone at the school wants to get to know you and love you.”

Establishing the preschool as an easy entry to kindergarten was one initiative that Danny Kieffer launched when he became principal of St. Charles three years ago. The incoming kindergarten class will be the largest class in the school for 2017-2018, indicating the preschool’s influence on the future of St. Charles. With the overall goals of increasing enrollment and educational excellence, Kieffer has also spearheaded efforts to revise the school’s K-8 math curriculum, expand resources for the science curriculum and enhance technology usage. The school, for example, received a grant to incorporate a Lego robotics program into its core curriculum for grades five through eight.

Extracurricular activities have experienced a boost as well.

“We’ve started a C-STEM [ Catholic science, technology, engineering and math] club, a chess club, an art club and a Lego league for competitive robotics, and we also offer karate,” Kieffer said. “That’s in addition to St. Charles’ great tradition of athletics that teach character and being faithful both on and off the court and playing field.”

CLOSE TO THE PARISH

Mark Kenney is arguably the chief architect of that athletic tradition, having been on the St. Charles staff for 37 years. Kenney, who teaches middle school math, social studies, religion and physical education — in addition to overseeing the school’s athletic activities — said he looks forward to going to work at
St. Charles now as much as he did nearly four decades ago.

One reason for that enthusiasm: the strong cooperation and support the school has always received from the St. Charles Borromeo parish. The school was founded in 1939, just one year after the church was built, so the two institutions have long been intertwined.

“All the pastors have made the school a priority — they’re not only an active presence in the classrooms, but also participate in student/faculty volleyball, basketball and floor hockey games, which the kids love,” Kenney said.

Former St. Charles students enrolled in high school or college often return to volunteer as assistant coaches, providing role models for school athletes and illustrating the importance of contributing time and talent to serve others. The sense of community is further emphasized every Friday, Kenney adds, when 270 K-8 students from the school join parishioners at 8 a.m. Mass at St. Charles Borromeo Church.

At the weekly Mass, students can sit with either their classmates or any family members in attendance.

“In kindergarten and first grade, I had a buddy from seventh or eighth grade to sit with at Mass,” said Malia Spindler, who recently completed first grade at St. Charles. “And sometimes, we do all-school bingo with our buddies.”

The positive influence that St. Charles’ middle schoolers have on younger students is one of the school’s biggest selling points for Kari Domeyer, a parent of two elementary-age children and herself a graduate of St. Charles.

“I don’t have to worry about what my kids are overhearing in an
all-school assembly or in the lunchroom or on the playground,” she said. “The older kids are good role models because they don’t use bad language, and they treat each other with respect.”

Domeyer also appreciates how teachers at St. Charles incorporate the Catholic faith into the curriculum, rather than containing it to religion class. She saw a definite difference between the preschool education her daughter received at St. Charles — which included learning about the sacraments and Divine Mercy — and the more generic one her older child received at a different Christian-based preschool.
“St. Charles is not just a Catholic school by name,” Domeyer said. “The teachers live out their faith and teach kids to do the same. The teachers are not just preparing kids who can repeat prayers and recite facts about the Catholic faith. They’re teaching them what it means to be a disciple and live out Catholic values.”

Like Domeyer, Jenn Villella is a former student at St. Charles and a parent of current students. She has also taught there for the last two years at the elementary level.

“I have a lifelong faith that started with getting a really strong background as a student at St. Charles,” Villella said. “I want that for my kids as well. Religion is my favorite thing to teach because younger students are so hungry for direction in their lives. Because this community embraces the faith, children develop standards and values that help them in life, whether they’re Catholic or not and no matter what they go on to do.”

Some St. Charles students go on to pursue religious vocations. In the last four years, four former St. Charles students have been ordained priests for the Archdiocese of St. Paul and Minneapolis, with three more currently in the seminary. One former student recently became a nun, and another one is following the same path. Regardless of their vocation, all students benefit from attending a school that Felicetta describes as a “special place.”

Felicetta, along with being a current parent and former student and teacher of St. Charles, now works as director of admissions at DeLaSalle High School in Minneapolis, where he regularly encounters students from more than 100 different middle schools across the archdiocese.

“The teachers at DeLaSalle often say that the kids from St. Charles have a real foundation in their faith that makes them natural leaders in the classroom, in campus ministry and in liturgical preparation,” Felicetta said. “Ultimately, St. Charles is really interested in what Catholic school is all about — molding good people.”