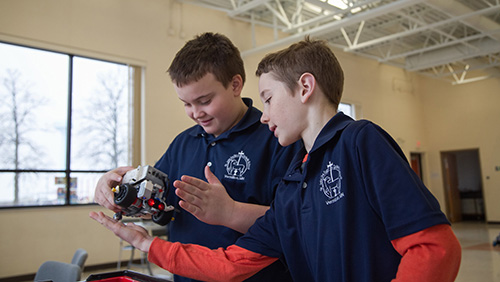 “When you walk into our school, you notice two things: our faith and our community.”

Second-grade teacher Maria Therres used these words to describe St. John the Baptist Catholic School in Vermillion, but they could have easily been said by any of the teachers, students, administrators or even the community members. Not only is there a connection between the school and the community, but there also is a sense of community within the school itself.

The school was founded in 1958 by parishioners who strongly believed in the value of Catholic education. Principal Mike Strommen emphasized how past generations were instrumental in establishing the school.

“Many of our students’ great-grandparents and grandparents played a role in literally putting the bricks in the walls of our church and school,” he said. “The school is an integral part of the community, and its success is a high priority.”

Brandy Wentzler, parent of two current students and one graduate, said the choice to send her children to St. John the Baptist was an easy one.
“I was a student at St. John’s growing up. My dad was a student at St. John’s. My grandfather helped build the school,” Wentzler said. “An opportunity allowed us to move back near home, and I knew immediately where I wanted to send my youngest to school.”

To support the rural school, the community of Vermillion has come together to ensure the school stays a top priority. Melissa Dunlay, fifth- and sixth-grade teacher at St. John the Baptist, believes it is different from other schools because of the people.

“The community is so supportive that it feels like one big family,” she said.

The school is small, with just 76 students, but based on a recent survey, nearly all current students plan to return next year. They are also seeing some interest from new families, especially those with children entering pre-K.

With a small school comes the opportunity for smaller class sizes, which students appreciate. When asked how her school is different from others, second-grader Annika Ries stated, “Our school is smaller, and our classes are, too.” She also said it allows her to have all her friends in her class.

Isaac Nauer, a fifth-grader, believes his school is different because it allows him to get more help and a better education. He also appreciates that the student body goes to Mass together every Wednesday.

On Wednesdays, St. John the Baptist holds a weekly school Mass that is also open to the community. Each week, a different grade plans and participates in the Mass — even the kindergarteners.

Parish and school pastor Father Cole Kracke said he is “amazed at the confidence they show getting up and doing the readings and petitions.” All of the grade levels receive religious education. The school also teaches faith and prayer by praying the rosary together in October, the month of the rosary; and May, the month of Mary. They also participate in Advent prayers and Stations of the Cross.

While faith plays a significant role in Catholic education, at St. John the Baptist, three Franciscan Clarist Sisters enhance the faith component. One teaches third grade, another teaches fourth grade, and Sister Tresa Margret Sauriammackel, superior of the community, recently retired. She is now involved with faith formation and pastoral care for the tri-parish community including St. John the Baptist and two churches in Hampton, St. Mary and St. Mathias.

“We are very blessed to have religious sisters here in our community,” said Father Kracke. “They represent the traditional nature of Catholic schools, and it is very rare for a student today to be taught by a nun. I often tell our students how lucky they are to have sisters here.”

After their former school closed, the Reinardy family had to make the difficult choice of where to send their children. When asked what went into their decision to send their children to the school, Melanie Reinardy stated, “When we visited St. John the Baptist, we were welcomed by the principal at the time, Sister Tresa Margret. The presence of sisters in the classroom, and in every aspect of the school, was the clincher. We wanted our children to see vocations in action.”

Religious education and prayer time are extremely important, as are all other subject areas. Teaching has become easier with recent technological improvements. Through the help of the Catholic Schools Center of Excellence, the school has reliable Wi-Fi throughout and has a one-to-one ratio of students to Chromebooks. The students have also learned to use Google Docs, check and send email, and even got to watch the live-feed of CSCOE’s all-school Mass last September at CHS Field in St. Paul. Therres pointed out that it has been “an amazing year of technology.”

The school added several new programs this year, including a resource center for one-on-one tutoring in math, accelerated math, reading and foreign language. It has also implemented the Maker Program, which is intended to be an outlet for all students to use their knowledge, imagination and interpersonal skills to create objects of value. It gives students the opportunity to bring innovative ideas to life, as they explore various disciplines including robotics, visual arts, computer programming, movie making and audio production. The school is also planning a garden that students will design and maintain.

Although small and rural, St. John the Baptist has shown that it can be innovative and forward thinking, as well as traditional in its faith. Strommen emphasized the school’s mission by saying, “God gave each of us special gifts, and He expects us to enhance these gifts and grow in virtue, so we can do His will.”

He continued, “We are simply trying to reach as many souls as possible with a faith-based education that leads to fulfilling lives.”

St. John the Baptist shines in its faith, charity and overall sense of community. Because it is located in the heart of a rural town, students observe a full picture of life both inside and outside school walls.

“We have a large green space outside. The playground sits behind the school. Students can see the church across the street and the cemetery nearby. The convent and the rectory are also in view, as well as residents and farm fields,” Wentzler said. “When the kids step onto that playground, they see all that is good: church, home, vocation, life and death.”