The Making of the Bread 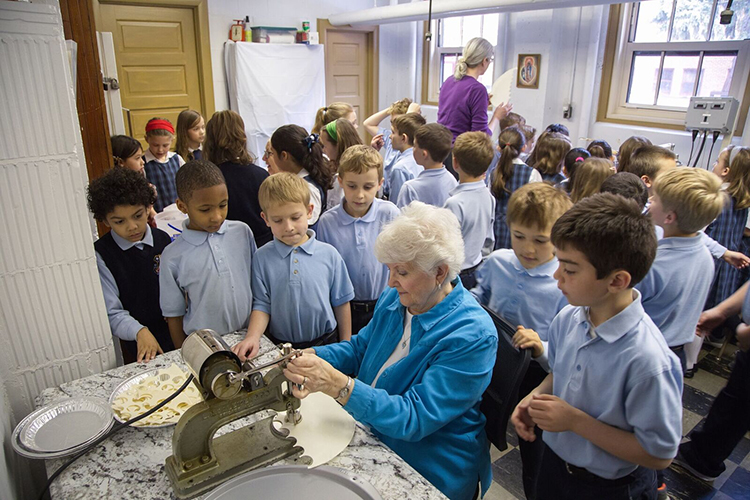 Kathleen O’Hern’s second-graders at Saint Agnes School in St. Paul made their first holy Communion last spring. Now, as they head back to classes, they can fully participate in the Eucharist at school Masses beginning on day one.

Last year, they were treated to something special as part of their sacramental preparation: They observed the production of the altar breads — a tradition that has graced Saint Agnes Church for around 60 years.

Near the parish office, O’Hern assembles her students. “Kids,” she says, “today you get to try the bread before it turns into Jesus in the consecration.”

Second-grader Henry Misenor announces, “This is getting us ready for first Communion!”

The students file respectfully into the basement, glide through the cement block hallway and enter the immaculate kitchen. The appliances — mostly antique — are lovingly cared for. And all have been blessed.

The first Communicants’ smiles are an exposition of new front teeth, as they recite The Lord’s Prayer and sing a song in Latin honoring Mary. Now they are ready to be spectators.

Eight volunteers make the altar breads, and four of them are present this day: Theresa Livingston, Mary Deustch, Rose Spangenberg and Viola Maehren. Each week, these women prepare 2,000 hosts for Saint Agnes.

The batter, made solely of flour and water, is ladled onto a baking machine that resembles a big waffle iron. After one and a half minutes, it’s done cooking and wafer-thin.

Next, the pizza-sized wafer is placed into a humidifier. This softens it by emitting steam so that it’s ready to be cut into 80 circles without crumbling. At this point, it’s primed for the cutting devices.

The German-made wooden hand cutter is the size of a shoe box. A lever stamping mechanism perches on top, and painted on its side is “Acquired 1955-1957 by Msgr. Alphonse Schladweiler,” who was Saint Agnes’ pastor during that time. The lever presses the large celebrant hosts.

The smaller congregation hosts are punched out with an apparatus akin to Grandma’s sewing machine.

Second-grader Maggie Coyne watches wide-eyed, saying she wants to be a eucharistic cutter when she grows up.

After the hosts pass inspection, the children sing “Angel of God” and then line up to sample the handiwork of the volunteers.

“It tastes like the unsalted potato chips at Cossetta’s,” said Coyne, referring to the St. Paul restaurant.

O’Hern prompts, “Now it’s bread, but after the consecration it becomes … ”

“Truly body, blood, soul and divinity of Jesus,” the children answered together.