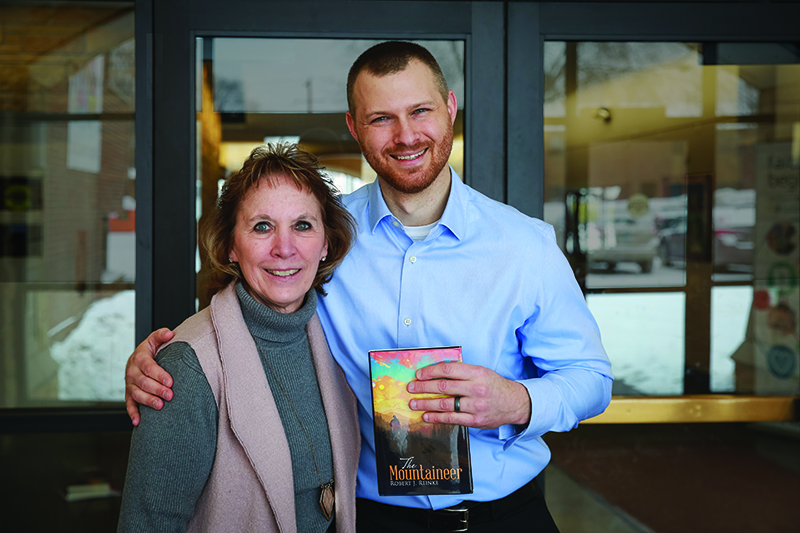 Scaling a mountain of goals

In 2015, Sacred Heart School alumnus Robert Reinke clambered away from financial management and landed in the arts.

“That wasn’t my calling. I always wanted to get into the creative realm,” said Reinke, a parishioner at St. Peter’s Catholic Church in Forest Lake with his wife, Anna, and children, Michael (2 ½ years old) and Annie Grace (8 months).

What incited the change?

In 2014, the Reinkes’ oldest child, Benjamin — born prematurely — departed this life. Reinke wondered what he could learn from this difficult season of life.

“I discovered that, outside of time, Benjamin found his mission in four short months, inspiring me to turn dreams into goals,” Reinke said.

Reinke desired to work with the Church in media. He soon founded his company, Majesty Creations, specializing in marketing videos for small businesses, nonprofits and Catholic schools, including the Catholic Schools Center of Excellence (CSCOE).

Storytelling through the faith

Benjamin inspired another goal — to write a modern classic novel. So last summer, Reinke released The Mountaineer, a suspense novel set in the Rockies where icy roads catapult a teenager’s car over a ridge. Reinke’s Catholic school education was the foundation for the story, and he chiseled life lessons onto the pages, hoping readers harness them.

At his alma mater in Robbinsdale, sixth through eighth graders have read it. Principal Karen Bursey, who once taught Reinke, is proud to offer a novel from a Sacred Heart graduate that’s rooted in faith.

“The Mountaineer is a great survival novel for teens,” Bursey said. “It integrates the Catholic faith and virtues throughout a young boy’s experiences.”

“God gives every child the capacity for greatness, and our Catholic teachers, principals and schools foster that greatness.” – Robert Reinke

Reinke yearns to grow and innovate with the Church, produce new classic films and write book number two. He has already summited several of Colorado’s 14,000 peaks with Anna, and they aspire to ascend even more with their

When asked if the Reinke children will attend Catholic schools, he answered:

“Yes! It’s a no-brainer based on academic results, moral and spiritual formation, and the formation of strong leaders — excellence in mind, body and soul!”