Helping Hands: St. Peter’s Preschoolers Give Back During Lent 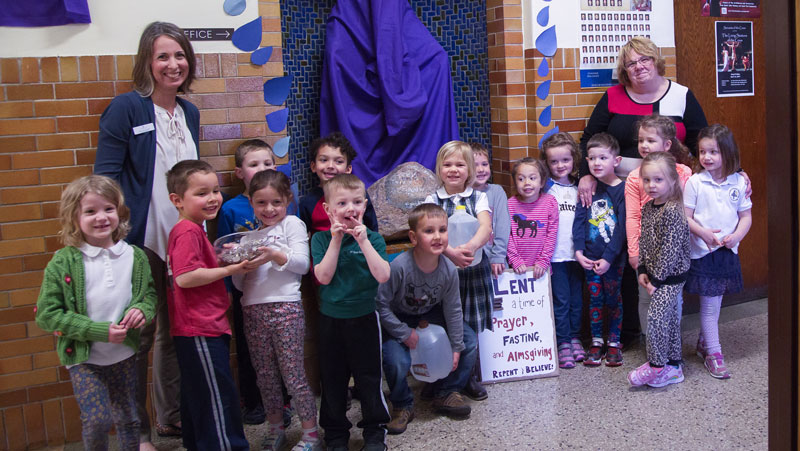 Rather than giving something up during Lent 2016, students at St. Peter Catholic School in North St. Paul brought something — rather, many somethings — to school.

The school partnered with H2O for Life, a national, Twin Cities-based nonprofit that provides service-learning opportunities for young students while raising awareness and funds for developing nations. Along with older students, the preschoolers in St. Peter Catholic School’s Faithful Beginnings program participated in the initiative, earning small coins and bills to donate during Lent.

Principal Alison Dahlman chose H2O for Life because of its all-encompassing nature of educational tools, almsgiving and all-school inclusivity. The curricular resources included small lessons that could be incorporated into different subjects, such as learning water purification methods in science class, calculating how much water one uses a day in math class and studying areas like Uganda that are affected by the water crisis.

Julie Esboldt, the preschool and childcare director, explained the program and its effect on the preschoolers, some as young as 2 years old.

“Even though some of the children are very young, they are a powerful force that can reach greater good working together. When we all put our efforts together […] we were really doing something to honor God’s family.”

The preschoolers cut out water drops from multicolored paper during Lent to represent the money they were collecting.

Quickly, their hallway began to fill up, and the paper river started winding to St. Peter’s upper floors. Anna Heintz, parent to kindergartener James and preschooler Cecilia, realized how formative this program was for her children.

“The kids were taught about conserving water at home, earned money for doing chores and brought it back to school,” she said.

Her own children had significant takeaways, she said, because “realizing that there are other parts of the world that are different than ours was really important and an eye opener.”

By the end of Lent, the school surpassed its $1,000 goal by almost $300. They sent the money to the Lwabyata Secondary School in Uganda to build a well. When asked about the program’s success, Esboldt laughed and said, “Even after Lent ended, I still had students bringing in money and wanting to give to such a wonderful foundation. One of the most fun things was watching the children come in with donations. They could barely contain their joy.”