Preparing Children for Kindergarten and Eternity 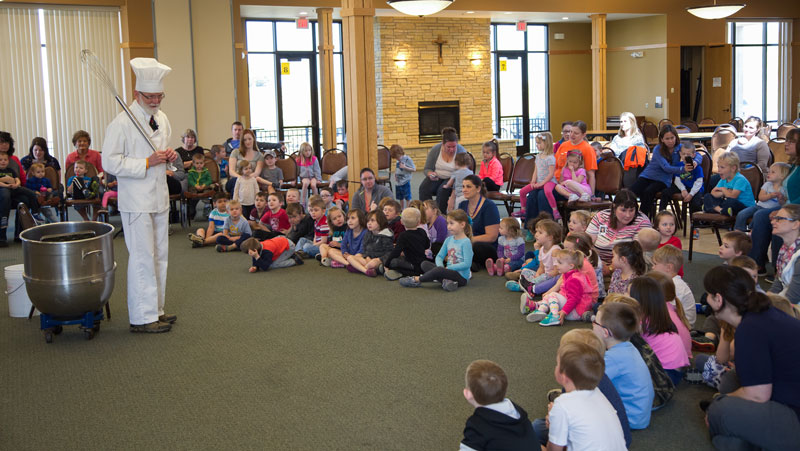 Preschool Director Barb Laumeyer leans forward in her chair and gives a warm smile as she talks about the children at St. Elizabeth Ann Seton Catholic School (SEAS) in Hastings.

“Christian values … you can’t start them too soon,” Laumeyer said. “Their brain develops and can remember so much, even at 3 years old. You want them to learn all about this so that it’s absorbed into who they are and who they’re going to be.”

That’s exactly what the pre-K through eighth-grade program at SEAS is about. The split campus in the small community south of the Twin Cities houses four preschool classes in the building attached to the Catholic church. The kindergarten through eighth grade classrooms operate in a separate building 2 miles away. Both campuses are focused on educating students not only in academics, but also in the faith.

“We have a two-day program, a three-day program and an all-day, every day program,” said Laumeyer, who, along with the rest of the staff, nurtures and educates children in the areas of play, discipline and faith.

On top of classroom activities, singing and the yearly duckling hatch, the preschool program at St. Elizabeth Ann Seton provides children with nutritional snacks through LANA — Learning About Nutrition through Activities.

“I always tell [students], ‘Just put it in your mouth. Try it!’” said Laumeyer, who has acquired a loving way of discipline thanks to the Love and Logic program.

Both campuses have adopted Love and Logic, which provides various methods to discipline a child with care.

“It gives you little things as a parent [or an educator] on how to make your child be accountable for what they did rather than putting a negative spin on it,” said Laumeyer, who also expressed her interest in having the authors of Love and Logic visit the school for a parenting evening. The program also allows students to make a smooth transition into kindergarten, because by the end of preschool, they are already familiar with its method.

“They really work hard to ensure that the preschoolers are fully prepared for kindergarten,” she said. “A lot of our kids who come over from the preschool program are really ready [due to] our Love and Logic discipline program.”

But it’s not just Love and Logic that provides a smooth transition for children. Nordman has implemented a kindergarten shadowing system that allows preschool families to tour kindergarten classes and sit in on them with other children.

“Last year, out of 39 students that [shadowed] kindergarten, 37 of them did the [official] tour and enrolled,” Nordman said.
SEAS also provides a buddy system between fifth-graders and preschoolers, though it only occurs semiannually due to the cost of busing between campuses.

Service opportunities are another way for students and staff at SEAS to remain connected despite the split campus.

“Service is a part of our mission statement, and we live it,” Nordman said. “We don’t just say that we do service projects. We actually fulfill it.”

Every grade level at SEAS does at least one service project so that the school averages about 5,000 service hours total and raises $6,000 for local charities every academic year. The biggest service project at the school is a partnership with Second Stork, a nonprofit based in West St. Paul that collects and distributes goods to new mothers with limited resources. Sixth-graders and preschoolers sort goods that are then driven back to Second Stork by confirmation students in need of service hours.

“So, it goes from preschool to sixth grade and then confirmation,” Laumeyer said. “All three [grades] are working together for one common thing.”

It’s not just the students who reap the benefits of SEAS. Parents are kept involved in the life of the school through multiple events such as Muffins with Moms and Donuts with Dads, and the end of the year Fun Lunch, during which parents eat lunch and play with the children at the preschool campus. Parents occasionally have the opportunity to meet in the evenings for an on-campus book study.

“As parents, it’s nice to get together and have that core Christian value and read about parenting,” said Laumeyer, who would like to host similar events during the day while children are in school.

Parents have been giving the school great feedback regarding their efforts to create a positive environment for students and families.

“We had really high expectations, and Seton has met them,” said Laura Lauber, who has had children attend both SEAS campuses. “We came from an extremely Catholic community and a great Catholic school system, and we based our location off of a Catholic school and a Catholic church that [held] the same values. And that’s where we settled in on Hastings, because they met everything we were looking for: strong community, strong Catholic school and strong faith.”

At the core of it all, it is the strong Catholic foundation that keeps the SEAS community welcoming, caring and educational.

“[The children] love babies, they love animals, they love finding treasures,” said Laumeyer, who has dedicated more than 20 years of her life to SEAS. “You’ve got to bring it down to their level because they’re absorbing — because their brain just absorbs. So, yes, Catholic beliefs right away. You can’t start too soon.”