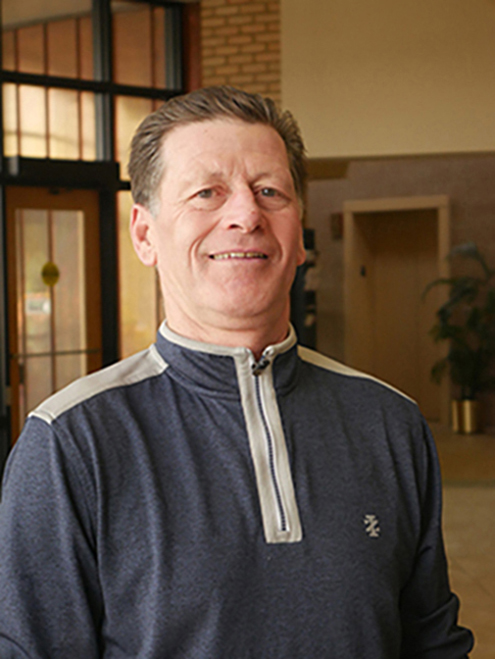 Facilities director at St. John the Baptist in Jordan takes pride in faith and farm life

Mornings with Marty Huss are magnificent. Just ask the students and staff at St. John the Baptist Catholic School in Jordan, where he serves as director of facilities.

Students describe him as funny and helpful, saying he talks to them about sports and gives them advice on how to do things.

“He’s that smiling face right away in the morning,” Principal Courtney Bierlein said of Huss, who doubles as a dairy farmer.
“He sets the tone for a joyful atmosphere in our building.”

Since Huss’ smiles are haystack-sized, Father Timothy Yanta, pastor of St. John the Baptist Catholic Church, appointed Huss the school’s official greeter. He knows all 96 students by name, fostering a deep connection. He even memorized their favorite tractor colors.

“Some of the kids have it tough at home,” Huss said, “They just want a smile and someone to talk to.”

Huss is following in his late father’s footsteps, farming the same land and also serving as custodian at St. John the Baptist, which he attended along with his seven siblings. Huss and his wife, Lori, sent their seven children to the school as well, and now granddaughter Lily wears a St. John’s uniform.

“The investment we make in Catholic education isn’t a sacrifice,” Huss said. “It’s a blessing.”

He also believes hard work blesses people. “Farming teaches responsibility and respect. I like to pass on lessons about hard work to the students,” he said.

Huss is no stranger to hard work. His daily schedule attests to that. He milks cows at 4 a.m., works at the school from 5 to 11 a.m., and continues to go back and forth between the two until 9 p.m., when he does the last milking on the farm.

Huss praises the teachers at St. John the Baptist, calling them role models. Huss is also a role model.

“I may visit with [the children] but it’s mostly hard work,” Huss said. “I am a teacher to them in that aspect. I’m not teaching them arithmetic or grammar, but I’m teaching them a lesson on what you accomplish with hard work.”

Huss shows that every single person who works at a Catholic school is committed to excellence, regardless of their job title.

“Marty embodies the verse ‘for nothing will be impossible for God,’” Bierlein said. “He is a big part of what makes St. John’s excellent.”