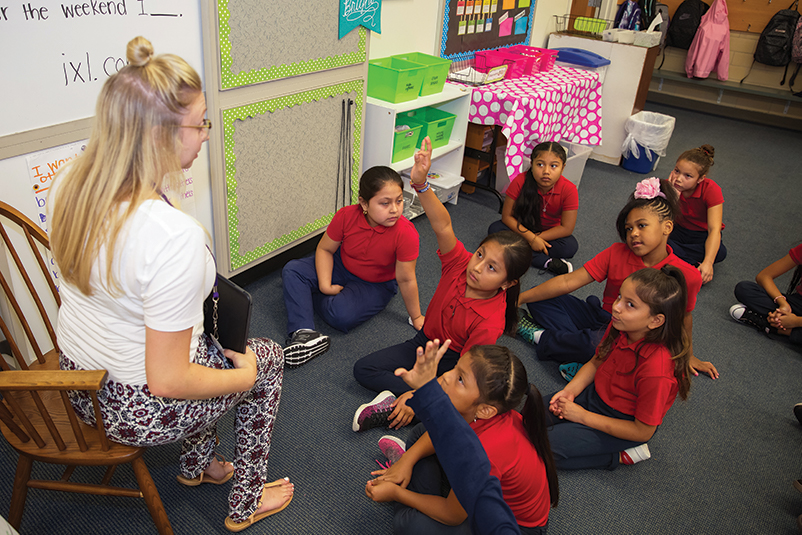 A new year at Risen Christ Catholic School in Minneapolis means new students participating in its dual immersion language program. Risen Christ, which serves students in kindergarten through eighth grade, is a member of the Two-Way Immersion Network for Catholic Schools (TWIN-CS). This is a national immersion network of the Barbara and Patrick Roche Center for Catholic Education at Boston College’s Lynch School of Education that helps schools transition from monolingual to bilingual.

“The program upholds the Catholic belief of whole-child education,” said Kristin Melley, director of professional development for the Barbara and Patrick Roche Center for Catholic Education. “This model says, bring your language, bring your culture, bring your whole selves to integrate into an excellent education.”

“We wanted to advance the tradition of academic excellence, but in a form that allows the Church to serve multicultural and multilingual students”

Demographics in the Catholic Church are changing, and according to Boston College’s 2016 “Catholic Schools in an Increasingly Hispanic Church,” “approximately 60 percent of Catholics under the age of 18 are Hispanic.”

“We live in a culturally diverse world,” said Patricia Weitzel-O’Neill, executive director of the school at Boston College and one of the study’s authors, along with Hosffman Ospino.

“We wanted to advance the tradition of academic excellence, but in a form that allows the Church to serve multicultural and multilingual students,” Weitzel-O’Neill said.

TWIN-CS provided a way for Risen Christ to meet its students’ needs. Ninety percent of Risen Christ’s student population is Latino, with the majority of students being English language learners.

“Risen Christ transitioned to dual immersion in response to the achievement gap that exists between white and Latino students.”

Risen Christ was one of 12 schools selected nationally for TWIN- CS in 2012. Today, TWIN-CS has grown into a network of 20 schools.

“The successful Catholic school transformation comes from a resilient, visionary, faith-filled desire of the school to become something worthy of the young Church,” Melley said. “It has to be done with great faith and great patience. The schools that began in 2012 are seeing remarkable results. The knowledge they have accrued dwells within the school, and it’s transformed the school.”

If a school decides that TWIN-CS is right for the school and community, leaders determine which language and model is best for them. At Risen Christ, a 50-50 model is used, where kindergarteners through fourth grade students spend half of the day using English and the other half using Spanish.

“Things learned in the English classroom are being built upon in the Spanish classroom, and vice-versa,” Rogers said. “So, the students might learn a concept in one language and practice it in the other language later in the day.”

For Risen Christ, the transition has increased enrollment. In 2017, 350 students were enrolled, the largest enrollment at the school in nearly 15 years, Rogers said. Enrollment remains steady this year.

“It tells us that we have a good representation of the community, and that we have a strong demand for Catholic education and the immersion program,” Rogers said.