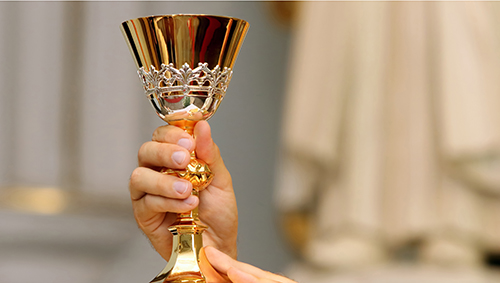 Father Becker is known to many as a man of dedicated and faith-filled prayer. As the rector of the thriving St. John Vianney College Seminary in St. Paul, (the largest college seminary in the United States), “Prayer changes things” is an assertion he doesn’t take lightly.

Father Becker’s bumper sticker is but one small way that he seeks to inspire people to pray more, and specifically, to pray for vocations to the priesthood, religious life and deaconate.

Many parishes in the Archdiocese of St. Paul and Minneapolis include a “Prayer for Vocations” as part of their regular Sunday liturgy, the words of which quickly become second nature to their parishioners.

Multiple parishes in the archdiocese have recently adopted a creative way to inspire prayer for vocations, with noteworthy results. Father Greg Paffel from the neighboring Diocese of St. Cloud started the “Traveling Chalice Program” a few years ago.

Here’s how it works:

St. Francis Xavier in Buffalo and Holy Family in St. Louis Park recently implemented the program. The Church of St. John, the birthplace of the program in the St. Cloud diocese, reports that, “During a Mass for the 100 students in the parish school, Father Paffel held an altar call for those who wished to have a prayer for vocations prayed for them. More than 20 boys stood up; the girls have shown interest in learning about possible vocations by attending final vows.”

This May 7 is the 54th World Day of Prayer for Vocations, on which Pope Francis calls all of the faithful to join in prayer for vocations. In this archdiocese, and especially in our Catholic schools, let’s respond by seeking more creative ways to help fan into flame the vocations God has prepared for our young people.

Let’s join in prayer with Mary, Queen of the Clergy, that she “Obtain for us many more.”