On With the Show 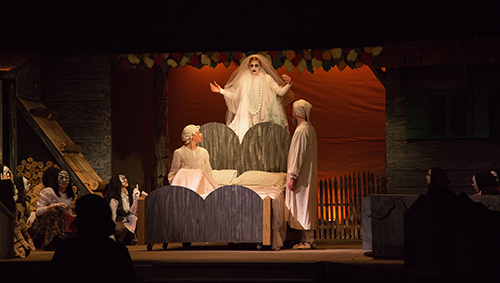 Sometimes the hottest ticket in town isn’t to the Guthrie, Chanhassen or any of the other professional theaters around. Instead, it gains admittance to an amateur yet highly polished and entertaining production at a local Catholic school.

Each spring, for example, Notre Dame Academy, a pre-K through eighth-grade school in Minnetonka, transforms its gymnasium into a theater, complete with stage, curtain, lights and sound system. Then Notre Dame Academy’s middle school students pour their talents and energies into performing a musical that always attracts many family members, friends, alumni and parishioners.

“The play is a big community builder because everyone in the seventh and eighth grades is on that stage singing, acting and dancing,” said Principal Ginger Vance. “Parent volunteers do everything from selling ads for the programs to making costumes, and we also have alumni parents and students who come back each year to help with building and painting the sets.”

Lori Wukmir, who directs Notre Dame Academy’s productions, plays to the strengths of the particular group of students when selecting a show — typically the “junior” version of a well-known musical that has been adapted for younger performers.

“The nature of our small school allows me to really get to know the students individually,” said Wukmir, who teaches pre-K–8 music education. The abundance of strong female singers and strong male actors among this year’s middle school students, for instance, prompted her to pick “Fiddler on the Roof.”

“I look for shows that can teach not only skills on stage, but also messages about life,” Wukmir added. “In a day and age where we have so much, the kids in “Fiddler” have to put themselves into the shoes of characters who have almost nothing, yet make the most of it.”

From page to stage

“As a classical school, we believe in a total integration of arts and culture into our curriculum. Knowing the canon of great literature helps our students understand how the world works,” explained Jim Grogan, principal of Holy Family, noting that the seventh-graders study medieval literature each year. “The arts are the way we come to understand each other and God’s will for us.”

This year, as in the previous eight years, Holy Family’s spring production featured an original script penned by Dale Ahlquist, an author and president of the American Chesterton Society. It’s a family project, with Ahlquist’s wife, Laura, directing the play and her two sisters serving as stage manager and set designer. Plus, the 40-person “King Arthur” cast included the two youngest of the Ahlquists’ six children.

“Many of the scripts have been based on fairy tales, which are a good fit for a Catholic school — they always offer a great moral story, and people are already familiar with them,” said Ahlquist, who spends about four weeks writing each show. “We add characters, write a lot of dialogue so many people get to say lines, and over the years have built a reputation of having at least one dance for the girls and one sword fight for the boys.”

At both schools, the immense efforts that performers and crew members behind the scenes put into the spring play pay off in ways both obvious and subtle.

“Being on stage gives the kids great self-confidence that transfers to their other activities as well. They know how to present themselves better, speak better and analyze a text better,” Ahlquist said.

“The play mixes the grades together and helps them see sides of each other that they may not see in the lunchroom, in the classroom or on a field trip,” Wukmir added.

The students also learn the value of hard work and perseverance. In pursuit of perfection, they devote time before and after school — and even on weekends — to rehearse singing, dancing and acting scenes again and again.

“It’s definitely a lot of work,” admitted Richard Norman, the seventh-grader who played the lead role of Tevye in Notre Dame Academy’s production of “Fiddler on the Roof.” “But,” he added, “it’s also really fun!”